Picture this, a five year old little girl, animal obsessed, lover of everything pink. Venturing on a visit to Folly Farm, for the first time of what was to become many. Falling head over heels in love with the cows, the sheep, the hay bales and even the tractors! The farm life was the life for her. And at just five years old she declared her life goal was to become a Folly Farmer, and she was determined. That little girl – yeah, that was me.

Fast forward to sixteen years old, my life goals had slightly changed, but I was still determined to work at Folly Farm. I became a food and beverage assistant. Working weekends and working hard. Pro ice-cream scooper, sandwich maker and instant-coffee deliverer. Dream made. But wait, fast forward again to eighteen years old – food and beverage supervisor. It was a dream, until I needed to pursue my new dream in fashion, and I left the Jolly Folly life. So present day, me, twenty four years old. Heading back to Folly Farm, husband on one side, four year old son on the other, ready for the ultimate trip down memory lane.

A lot had changed since I last visited and it was so good to see just how much had. We started off our day by heading straight to the main map in the entrance, instead of paper maps, they now have large boarded maps around the park to save on paper waste. Great news for the environment! And so we headed to our first destination of the day, it was the all new, exciting Asian Adventure! New for this year including red pandas, Asian wild dogs and Asian leopard cats. We were very lucky as a lot of the animals in this area were out and about ready to say hello. I’d never seen a red panda in real life before, and I was so in awe of their beauty. Parker was also in love and at the end of the day picked up a little red panda cuddly toy from the gift shop, which he proceeded to name ‘Red’. We learnt all about the conservation work that Folly Farm are helping with, including a breeding programme with the two red pandas they now have, and their sponsorship to a forest guardian in Nepal to help monitor and protect red pandas in their natural habitat.

We then took a good stroll around the rest of the outside zoo, there was so much to see and we were so lucky to see most of the animals out enjoying the sunshine. The walk was also really lovely, really good for accessibility, with smooth tarmac grounds most of the way through and every enclosure with ramp access. So we walked, from the meerkats, to the lions, to the flamingos and back to the rhinos. We listened to the rhino talk from one of the keepers and it was a real eye opener. Hearing about how the Eastern black rhinos are actually critically endangered, with only around 650 left in the wild. However it was so uplifting to hear that one of Folly Farms black rhinos was actually pregnant, and that they’re expecting a rhino calf early next year! 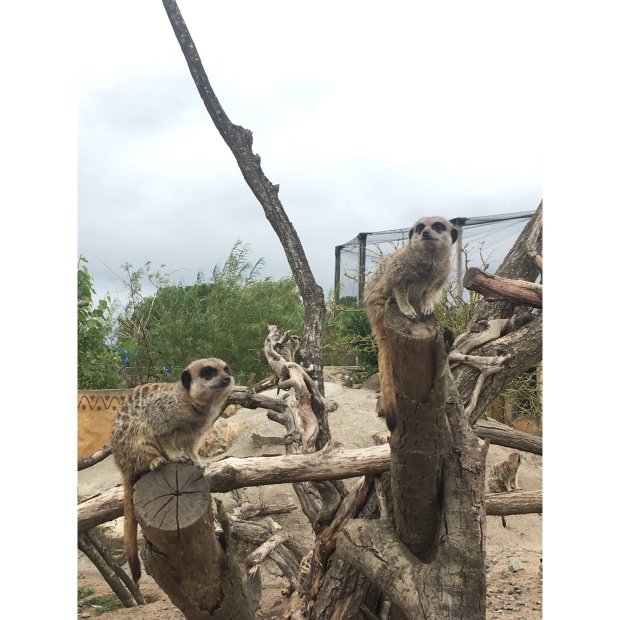 After that we had a waddle down to the penguins and then to have a quick photo with the giraffes. After seeing the rest of the outside zoo animals, we decided it was time to see Parker’s favourite animal of them all, the turkeys! Yes the turkeys. In to the Jolly Barn we went. In to see all the farm yard animals, it was like being on a real farm. I felt five again, although funnily enough the barn actually seemed much bigger now! With so many more animals and so many areas to explore and learn. We saw the turkeys, the goats and sheep and to our surprise a cheeky rat. One of the lovely folly farmers Ffion told us all about Luigi the rat and Parker was over the moon. He even braved up for a stroke! 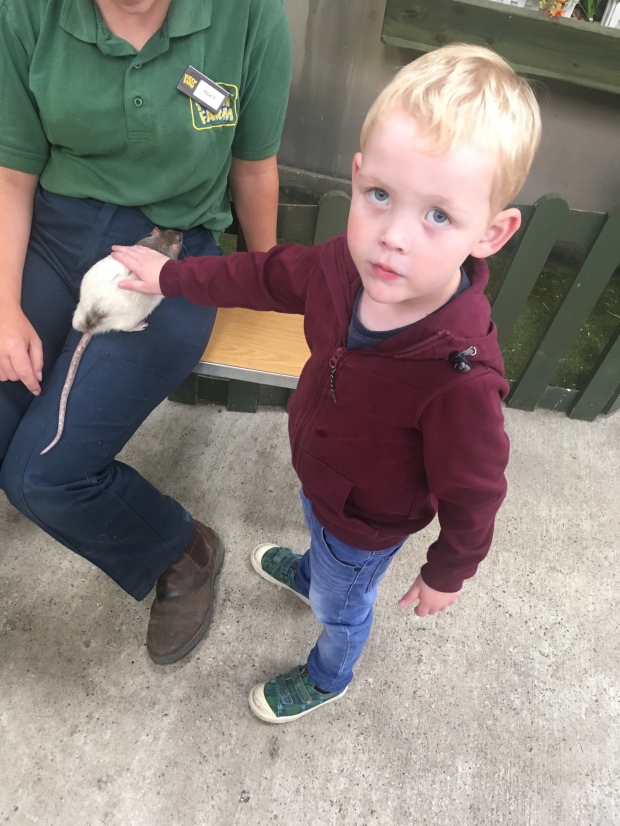 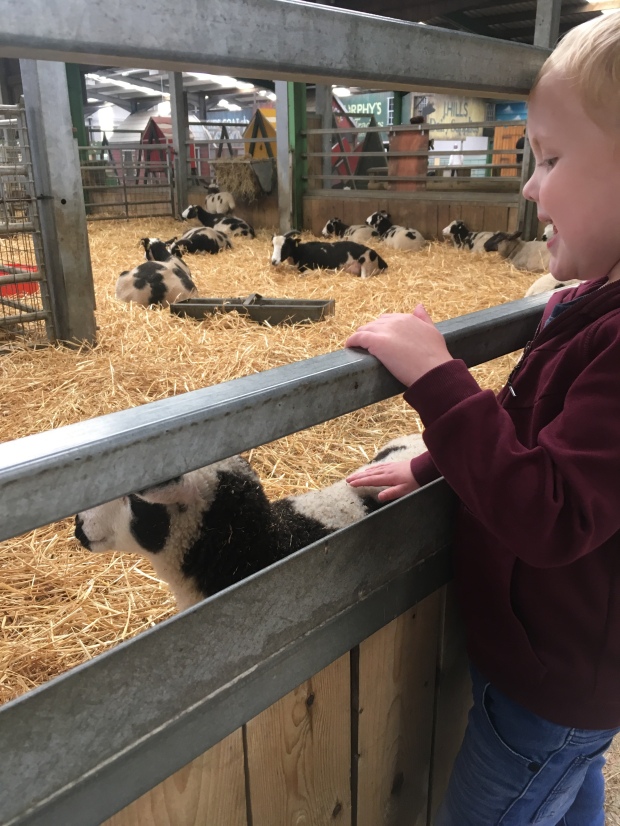 There were so many new additions to the farm, including new born lambs and ducklings that were just three days old! Too cute! Through the barn next and onto the land train, where we learnt all about the working part of Folly Farm, and all the other animals out in the fields. Including the mochyn (pigs in English!). We decided to pack up a picnic for this Jolly Folly day and at lunch time we parked up near one of the play parks. Although if you decided you’d rather treat yourself to a hot meal, there’s so much choice! With a sandwich cafe near the indoor Carousel Woods play area, or a hot meal in the burger bar and with lots more restaurant options on site, there’s something for everyone! And I really mean it, I was overjoyed to see their ice-cream parlour ‘The Dairy Shed’ not only sold all the traditional favourites, but also ice lollies and a vegan magnum! Such a treat, I had to get one!

After lunch we had a go in the outdoor play areas, we could’ve spent hours there! With so many different fun activities, including diggers in the sand, ride on tractors and pirate ship play areas! Parker was in his element. We finished off our outside play with a ride on The Big Wheel. A fabulous view of the whole park, and a great way to see more of the stunning Pembrokeshire countryside.

It wouldn’t be a day out at Folly Farm without a trip to the vintage funfair. At a very reasonable 50p a token, the fair is the perfect place to end your day. With most rides only costing 1 token per person, per ride. We had a family spin on the vintage carousel followed by a couple of the smaller rides for Parker. It was magical. The lights, the sounds, the smell of the candy shop and dunking donuts filling the air, it really was wonderful.

With 5pm fast approaching we decided to call it a day. As we were leaving I noticed a sign for the ‘boomerang ticket’ get your receipt stamped on exit and you can return within 7 days for half the price. Ideal if you’re on a long Welsh break, as even though we managed to fit most of the activities in, we know Parker could’ve easily played on the outdoor play areas for hours longer! And as it was such lovely weather we gave the indoor theatre show a miss, which we’d have loved to have gone back and done if the weather wasn’t on our side.

Although we were very kindly gifted this day out by Folly Farm in return for a blog review, I would happily pay and go back tomorrow, and the next day and the next day! It really was a Jolly Folly Day. And the best bit? Parker has left at just four years old with the same dream I once had. One day he will drive a tractor and look after the animals he told me.

One day he might be, I’ll never let him stop dreaming. As when I was just sixteen my dream became a reality.

So if after this read you fancy a Jolly Folly Day Out I’ve linked the booking page below, where you can save a good 15% by booking online. You all know I love a bargain right?

So have you taken a trip to Folly Farm? Let me know about your Jolly Folly Day in the comments, or if you’re planning a visit soon!